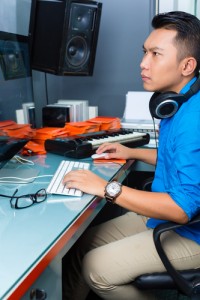 {5:24 minutes to read} It takes money to make money. For most of modern history, artists seeking mass-market success have had to partner with “production companies”—record labels, publishers, and film studios—in order to get their work in front of the public.

Though technology has in recent years reduced the burden of that requirement a bit, that very easing has also unleashed a flood of creative work in the market (much of it of indifferent quality) and mainstream success still—perhaps now more than ever—requires funds and expertise in production and promotion. It is instructive, for example, to note that in the past 20 years, only one record—Macklemore & Ryan Lewis’s 2013 Thrift Shop—has topped the Billboard Hot 100 without the backing of a major record label.

Mass-market production companies do crucial work in this regard, but they usually operate on a “blockbuster” business model: they produce many, many creative works, knowing only a few will succeed, but that those will (hopefully) succeed hugely, thereby making up the losses and an additional profit.

Legislators have tried a few different approaches to try to ameliorate this situation and permit artists to profit more substantially from their works. Under the US Copyright Act of 1909 (which preceded the current, 1976 Act), Congress divided the time of copyright protection into two 28-year terms. It intended that an artist might sell the first term to a publisher, but if the work proved to be a success, the artist would then be able to renew the copyright in his or her own name for the second term, thereby “re-capturing” the later profits of a successful work. The artist may still need a production company to distribute the work, but now that it has an established track record, the artist can negotiate with many competing producers from a much stronger bargaining position.

The 1909 Act approach proved insufficient. Production companies, ever savvy, wondered why they should settle for one term when an artist with little bargaining power could be made to sign over both terms to the company at the beginning. In 1943, the Supreme Court ruled that such an assignment of both terms was indeed effective, thereby thwarting the purpose of the two-term structure. [1]

In drafting the current (1976) Copyright Act, Congress returned to the drawing board. Instead of two terms—which clearly hadn’t worked—the 1976 Act confers on the artist a single term but gives the artist an opportunity, 35 years out, to “re-capture” a work’s later profits by terminating any early transfer of the copyright. Unlike the 1909 Act’s second term, the right to terminate a transfer is inalienable and remains with the artist (or his heirs) “notwithstanding any agreement to the contrary.” [2]

Production companies, of course, were not wild about this new development and lobbied heavily to limit artists’ termination of transfer rights. As a consequence, termination of transfer is not as simple a business as it might otherwise have been. An artist (or, after his death, certain of his heirs) may terminate only during a narrow five-year window, and only by—metaphorically speaking—jumping through a number of flaming hoops in order to satisfy the technical requirements of the Act. Failing to clear the hoops in time results in a loss of the termination right.

In 1998, Congress extended the term of copyright for an additional 20 years. In doing so, Congress authorized a second termination of transfer window, allowing artists (or their heirs) to recapture for themselves the profits of those extra 20 years. But again, artists must clear the same set of flaming hoops within that narrow window or lose their termination rights again.

In the next post, I will discuss the specifics of those termination windows and the nature of those “flaming hoops,” so that artists and their heirs don’t lose their termination rights through inattention.