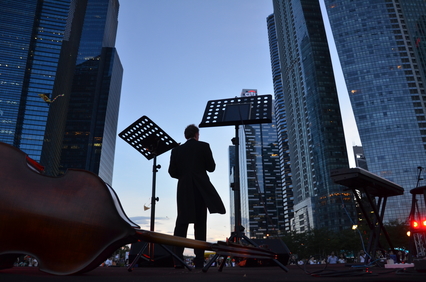 Among the exclusive rights accorded to copyright holders is the right to perform their works publicly, or to permit others to do so.

Generally, a public performance includes not only a “live” performance, such as a concert or play, but also the public exhibition or playback of a recording (such as a film or sound recording), and the public transmission or broadcast of live or recorded performances (such as by radio and television). Consequently, unless specifically exempted by law, any public performance of a copyright-protected song, play, or motion picture (among other types of work) has to be licensed by the copyright holder.

Licenses can usually be obtained directly from the copyright holder (a motion picture studio, a record company, or a music publisher, for example). However, in some cases, licenses may be (or occasionally must be) obtained from a Copyright Management Organization (CMO).

In most instances, direct licensing is possible, and in many instances, this is the industry standard. For example, motion pictures are directly licensed by their owners, or by an agent, such as a distributor. Such licenses are usually on a work-by-work basis: If you want to broadcast a particular film on your television station, stream it from your website, or exhibit that film in your theatre, you would seek a license from the copyright holder or its agent.

In some instances, direct licensing is simply impracticable. Showcasing live music in a nightclub, for example, would require direct licenses from the rightsholders of every song played. This would be:

Licenses granted by PROs are usually “blanket” licenses. Each PRO grants a license covering its entire repertoire so that a user such as a restaurant or broadcaster is entitled to perform any of the songs in the repertoire. In many countries, there is only one PRO so that securing a license from that PRO covers all works. In other countries, including the United States, there are several PROs, and a user must obtain licenses from each in order to cover all works.

Though there are exceptions, most PROs operate within a network of reciprocal agreements with their foreign counterparts, so that a user who obtains a license from his local PRO is licensed to use works in that PROs repertoire and also those in the repertoires of the foreign PROs with whom the local PRO has an agreement. Consequently, for example, a German user licensed by GEMA, a German PRO, may perform any work in the GEMA repertoire, but also any work in, say, the repertoire of PRS, a British PRO, with whom GEMA has a reciprocal agreement.

Questions about public performance licensing?  Please feel free to give us a call or leave a comment in the box below.