{4:30 minutes to read} In my last post, I discussed the design patent, a form of protection available under the Patent Act to protect designs that are “primarily ornamental” rather than those which – like most inventions one normally thinks of in connection with the Patent Act – are “primarily functional.” Design patent protection can coexist simultaneously with copyright protection for the design as a graphic or sculptural work.

In addition to patent and copyright law, non-functional designs can also be protected under the federal Trademark Act (also known as the Lanham Act), and under state trademark and unfair competition law.

As discussed previously on this blog (see “What is Intellectual Property?”), trademark law serves to protect non-functional features of a product which identify to consumers the product’s source, and distinguish the product from similar products supplied by competitors. Marks are frequently words (e.g., “Nike”) or logos (e.g., the Nike “swoosh”); in certain circumstances, even colors and scents have been registered as marks by the U.S. Patent & Trademark Office.[1] (More on these sorts of outré marks in a future post.)

“Trade dress” protection is a somewhat more amorphous category derived from the same unfair competition principles which give rise to trademark.[2] Trade dress falls into two categories: (i) product (and service) packaging, and (ii) non-functional aesthetic choices in the design of the product which the public may associate with a product or service provider.[3]

In the first category, we might think of the particular recognizability of, say, the diagonal bands and green-and-yellow 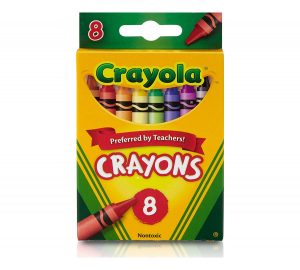 color scheme which are longstanding features of boxes of Crayola crayons.  A bit further afield, to American intellectual property lawyers the paradigm case regarding trade dress might be Two Pesos, Inc. v. Taco Cabana, Inc.: [4] two Texas fast food restaurants serving Mexican cuisine decorated their restaurants similarly, using “a festive and vivid color scheme … neon stripes … bright awnings and umbrellas … artifacts, bright colors, paintings and murals.” [5]  One of them, Taco Cabana, claimed that the decor motif served to identify its restaurants as distinct from those of competitors, and that therefore Two Pesos’ use of a very similar decor motif infringed its rights under the Lanham Act. A Texas jury found that the decor motif was “inherently distinctive.”

Despite the jury’s finding of inherent distinctiveness, the Two Pesos case was appealed finally to the U.S. Supreme Court on a more technical question: whether or not protection could be enforced where the jury also found that there was no “secondary meaning”; that is, the public did not specifically associate the “distinctive” decor motif with Taco Cabana. The Court ruled that such protection could be enforced even in the absence of secondary meaning.

However, in a later ruling – Wal-Mart Stores, Inc. v. Samara Bros., Inc.[6] – the Court limited the significance of its ruling in Two Pesos by differentiating the first category (packaging) from the second (aesthetic design). In the latter category – which encompasses features which seem to fall squarely into the ambit of design patent protection – the Court unanimously balked at protecting those features under a trade dress rubric without a showing that the public specifically associated those aesthetic features of the product with the producer. Instead, the Court explicitly directed any would-be applicant for trade dress protection to (time-limited) design patent or copyright protection instead.[7]

Wal-Mart Stores v. Samara Bros. dealt with the design of children’s clothing. In a following post, I’ll return to that case and others to discuss the evolving state of protection for fashion in the United States.

[1] Color: See Qualitex Co. v. Jacobson Products Co., 514 U.S. 159 (1995). Scent: See U.S. trademark registration no. 4618936, a “flowery musk scent” which Verizon Wireless at one point intended to deploy in its flagship stores. To my knowledge, no one has yet tested the enforceability of a scent mark in the United States.

[2] However, the federal Trademark Act does not provide as much protection to trade dress as to trademarks. See Qualitex, 514 U.S. at 173-74.

[3] While English law doesn’t recognize “trade dress” by that name, a well-known House of Lords decision – Reckitt & Colman Prods. Ltd. v. Borden Inc. et al. [1990] 1 WLR 491 – presents the potential collapse of these conceptual categories. In that case, a company selling preserved lemon juice in plastic squeeze bottles shaped like lemons sought to prevent another company from doing similarly. The trial court found that consumers would likely have confused one product for another, and so an injunction was granted and upheld by the Lords on appeal. This analysis presumes that the product is lemon juice and the bottle is mere packaging; in other words, it falls into trade dress category (i). However, another reading – one which at least Lord Bridge of Harwich acknowledged and with which I agree – is that the bottle and the juice it contains are together the product; consumers buy the lemon-shaped squeeze bottle not because it identifies a manufacturer, but because the bottle itself is appealing. In other words, the bottle of lemon juice should fall into trade dress category (ii): aesthetic features of the product.